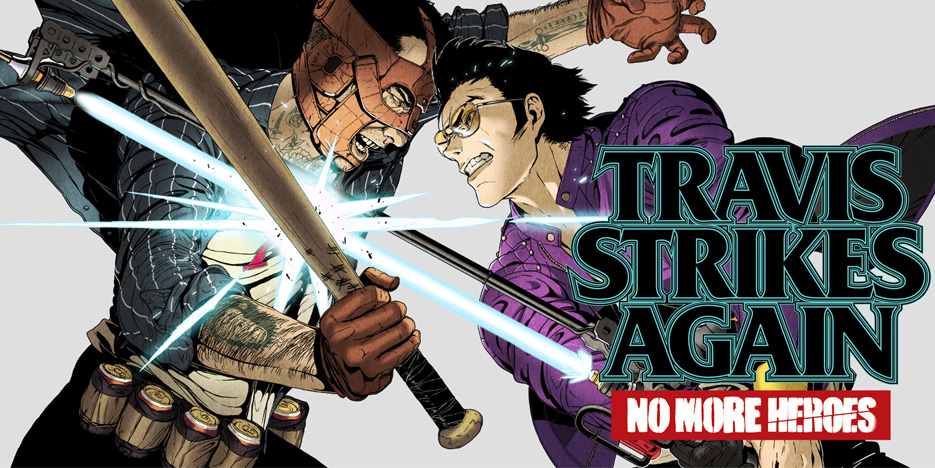 On a rainy day at the beginning of December we got the opportunity to meet up with Suda51 in London and talk with him about his upcoming game Travis Strikes Again: No More Heroes. These were our questions we asked the creative mastermind.

For a short introduction: Can you tell our readers in your own words what Travis Strikes Again: No More Heroes is about?

This is a brand new adventure for Travis. Instead of fighting assassins, this time he will be going into six plus one different game worlds and fight within them.

How did you come up with the idea of the demonic videogame console Travis is sucked in. Was it some weird nightmare that you had or does it contain a deeper meaning?

I can‘t remember if I had such a dream or not, but there are two game related films that influenced me with the idea. The first is David Cronenbergs „eXistenZ“ which is about a futuristic game console that you can jack inside your body and which sends you right into the game world. The other is an italian movie called „Nirvana“ in which a game creators character speaks to him. These two movies are showing us the future of what games are going to be. We have VR now and it just needs a little more time so that we can more or less enter a real world that exists based on a game. I wanted to take that idea and take my own spin of it.

Many of our readers think that Travis Strikes Again: No More Heroes is a collection of „minigames“. Whereas at gamescom I had the impression that it is much more complex than that. Will the game be as complex as No More Heroes?

Due to the fact that this is an unnumbered sequel to the No More Heroes series, I realized that people are concerned about how different it is going to be. I hope that once people play it, they realize that it has the same level of feelgood fast paced action. I think the best way to get that message out is going around and explain it in detail.

No More Heroes was a pretty violent kind of game. How many litres of blood can we expect in Travis Strikes Again: No More Heroes?

There are actually only two drops of blood in this game, because Travis is in a videogame world and he is fighting against bugs and pixels.

The japanese videogame rating goes A,B,C,D,Z where „Z“ is like „mature only“. This game got a C-Rating. It is the first game of No More Heroes that got ranked so low. In Germany it got a „USK 16“ rating cause there is a lot of foul language in it. Same thing in North America. They also got a mature rating because of the language.

In „Electric Thunder Tiger“ we saw that Travis can obtain skill chips. Will those be limited to only one of the game worlds or be kept for every other game Travis is entering?

Of course you can take the skill chips with you in the other game worlds. There are 24 to collect in total. Some of them are Travis only, some of them are Bad Man only. The whole idea is that you decide which game world you are going to enter and which four skills are the best to take with you. You really have to plan your strategy and that creates a certain depth to the battle system.

How did you choose the gameplay mechanics behind the different game worlds. Was there a certain scheme behind it?

Thats a sharp question! The idea behind the worlds wasn‘t just to make fictional games. It is also Grasshopper Manufacture 20th anniversary, so we wanted to implement games we planned to release, but never did for various reasons – we wanted to bring their essence to life somehow. It also was a great opportunity for us to experiment with new genres we never came in touch with before. There is a lot more behind it than just the fictional aspect.

How long does it take to complete the six plus one videogame worlds?

It should take around ten hours to complete everything, maybe a little faster, if you are going to hurry. There is also an adventure game portion where the time for completion may vary on how fast of a reader you are.

I‘d also like to recommend: If you buy the game don‘t just sit there and beat it in one day. Maybe take it like one game world per day and really get into that one game.

Travis Strikes Again: No More Heroes will have many references regarding indie games. Could the game be considered a loveletter to those kind of games?

That's a very good way to put it. My experiences with the scene, meeting all those small teams and making friends with them – I really built a lot of connections so it is a loveletter in that kind of way.

Since Travis Strikes Again: No More Heroes has that strong connection to indie games: What is your favourite indie game in recent times?

The most recent game I really liked was „The Missing: J.J. Macfield and the Island of Memories“ from SWERY.

SWERY of course is a good friend of mine, but even without that relationship I was really amazed by the game. I was like „Wow, this guy just made one crazy game!“

Yeah, I just saw some trailers, but really want to play it somewhen in the future too!

When you actually play it, the way you view the game will change!

So, back to Travis Strikes Again: No More Heroes: How different was the development for the Nintendo Switch compared to the Wii?

The biggest change was that we could use middleware. We have used Unreal Engine 4 for a while, which made it very easy this time. Back on the Wii we needed to build our own engine, to create the game within that. It took a long time to create a build with that. Now everything is much faster.

With that setup, do you think that other games of you might also be ported to the Nintendo Switch, like Killer 7 or the original No More Heroes?

I definitely want to do that if possible. On the top of my list are No More Heroes 1 and 2. The IP is currently shared between Grasshopper Manufacture and Marvelous, so we are talking about how that´s possible.

Do you think Travis would make a good fighter in Super Smash Bros.?

If he has a chance to join the fray, he would be a very balanced character. I want to work very hard, so that Travis will be a candidate for the next Smash! I also think Travis would be a great rival for Bayonetta.

And last but not least: Do you have any plans for amiibo – maybe for No More Heroes 3?

Ahh, I want one myself!

I even have a very concrete idea on what the amiibo will be like. I'm pretty confident that it's nothing that anyone would expect. People would probably imagine Travis holding the Beam Katana, but the amiibo I want to create is Travis saving his game while sitting on the toilet [a game mechanic featured in Travis Strikes Again: No More Heroes].

We wish to thank Suda51, his team and the staff of Little Big PR for the invitation to London and the interview! You guys rock! 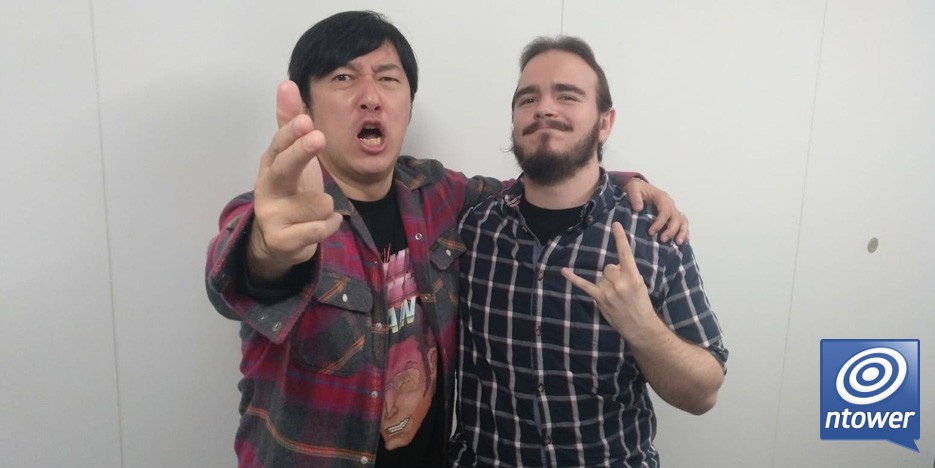