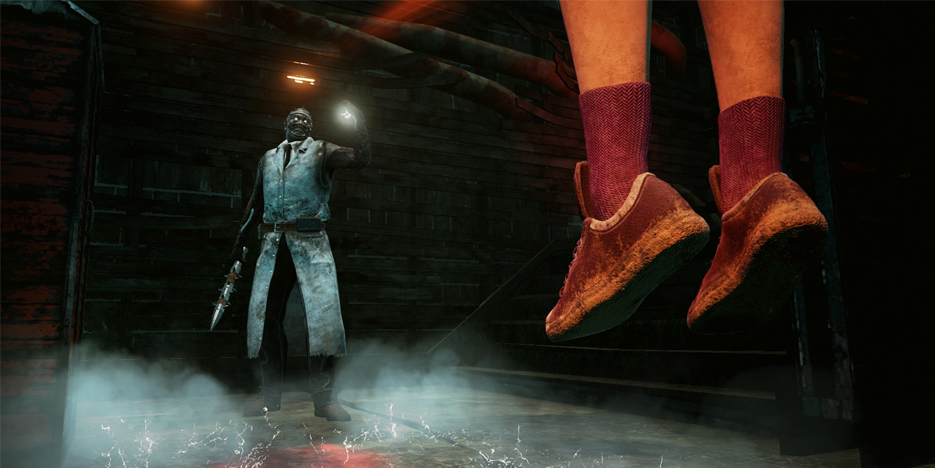 At gamescom 2019 we met up with Mathieu Cote, the producer of the renowned horror game Dead by Daylight and asked him some questions about the upcoming Nintendo Switch version. Here‘s the written version of our dialogue.

Dead of Daylight is kind of a brutal game and Nintendo used to have more of a family-image as a company. Why did you decide on a Nintendo Switch version?

That is very true, but there are a lot of gamers on the Nintendo Switch. And, I think, while Nintendo will always be the most wholesome company making games, they also cater to a wider audience. I think Nintendo is making an effort to show that you can play with your child on Nintendo Labo and after it is asleep you play Dead by Daylight. I think that more and more this is a reality for our players. We also wanted to make sure that it is in the hands of as many people as possible and the Nintendo Switch is a very popular console. It is also a very social console. I think Tertris 99 brought many people together and showed that it is possible to play multiplayer on the Nintendo Switch.

We‘ve been making games for Nintendos platforms for many many years and they have been really forward with the fact that they wanted to have a catalogue of games that are a little more varied than what they used to go for – and they want to change their image a bit. You know, not drastically, Mario will always be Mario and be there but also other things. It allows for a wider range of games now.

Did Nintendo approach you and said that they wanted something changed or cut from the game?

No. Same with the government in Germany. The thing is, Dead by Daylight is very much inspired by the movies of the 70s and the 80s. In those movies the emphasize is put on the anticipation of the violence and the suspense leading to the stress and the tension of the situation. Much more than depicting violence graphically. It‘s not important in our game to show gruesome things happening. The game is about showing what leads to that – to show that there is real danger and real drama. In that sense it allows us to be much more approachable for that.

I can confirm that! If you play as survivor and you have that killer in your neck. It feels like real stress.

Yes, you dont need blood everywhere over the screen for that tension to be real.

When we asked Nintendo to get the mushrooms or something like that into the game – we wanted to do big things with Nintendo – they were like: Yeah, no, you can‘t put the mushrooms in the game. Mario can not have blood on his hands. And we were like: Okay, yeah, that is fair.

That‘s kind of a shame, but…

Upon porting the game to the Nintendo Switch, what was the biggest challenge you faced?

The biggest fact was that this console is very versatile – it can be many things. It can be a whole console when docked and you can take it with you go and then the UI needs to make sense. And then you can play with the controller attached or you can play with Joy-Con seperately. There are so many ways you can use that console that we needed to support all those variations. That was maybe the biggest challenge that we had.

However we have a lot of expertise within the studio, working with a lot of different consoles and on different ports. So we weren‘t scared about that, but it was a lot of work we needed to do.

What will be included in the Nintendo Switch version? Maybe some extras?

Yeah, absolutely. We want people that buy the game on Nintendo Switch to jump in where the train is. It‘s a running train that has been going for three and a half years. So it will come with all the already existing chapters included. You have nine killers, ten survivors, the „Charity Case“, the „80s Suitcase“ and the „Bloodstained Sack“. Those three packs of cosmetics will be included.

You already kind of answered this question but: Will there be any Nintendo related content?

There will be an exclusive outfit for the Trapper. And that‘s not just a preoder thing. If you buy the game on the Nintendo Switch, the Trapper will have that outfit available.

Is that all or are you planning something more?

Not at the moment. At least nothing, what we can talk about.

The killers are a very iconic element in the game that allude to different horror franchises. How do you choose those franchises?

It‘s getting tougher! At first, the whole world was there. So we got a lot of those iconic things like Michael Meyers, Freddy Krüger, Ghostface, Leatherface, the pig from Saw, Ash vs. Evil Dead. It‘s amazing that we were able to get our hands on that. Now we got Stranger Things, which is not a legend of the past, but the biggest thing today. Let‘s say that the list of amazing franchises that we want to get is getting very very short.

Yes, I pondered myself and didn‘t came up with much, but well... maybe Hellraiser?

I‘m a big fan of Hellraiser! And I think Pinhead stepping in the world of the Entity would fit perfectly. Yeah, there is a few other names out there – not many though. But there are so many original chapters that we could do. We barely scratched the surface. We‘ve done the classics of Horror with the Trapper and the Hillbilly and then we‘ve done a few inspired by other countries like the japanese Spirit or the eastern european Huntress. And there is many many more to explore in that realm of folklore, what lives under peoples beds all around the world. And then there are also the universal things like the Clown. Everybody fears the Clown. Even the Doctor is somehow an international thing. There is a fear of these things you‘re ought to put your trust into. So there is quite a lot of stories for us to tell in the future.

Let‘s get to something a litte bit more casual. Which Nintendo character you think would make a good serial killer?

Oh boy! We actually talked to Nintendo – I‘m not sure if I‘m allowed to say that, but I‘ll do it anyway – if they could give us Pius Augustus.

It‘s an old game, but … it was not available. But I mean, if you look at Nintendo it‘s all wholesome and good. Even the bad guys, even Bowser is not that bad. He will jump in and go carting with Mario. They play tennis and it‘s fine, you know?

Well maybe one of the Zelda characters. There are some meaner people in Zelda. But even then … I‘m not sure. Maybe it‘s just Luigi.

He‘s just a weirdo. And it has to be the ones that you dont suspect. I‘m a big Luigi fan though [shows his Luigi tatoo]. I‘m also a younger brother and I feel for the guy.

That‘s funny. Internally we thought Luigi would be a good pick, too. And we did come up with Birdo. Because he has this very starry eyes…

Oh yeah, well there is a few people with weird personalities that you could think of.

So, what would you like to tell our readers what makes Dead by Daylight special?

I‘d first love to give a big welcome to the players on Nintendo Switch. There are a lot of people who have no idea what they are in for. Their gaming habits might change because of that. There is so many things to discover. The game is very very deep. And the first few moments within the game, they‘re gonna suck. But the first victories are so satisfying. You‘re gonna be hooked. Ha! Pun intended.*

I was pretty suprised the first time I played it that sounds play such a big role in the gameplay.

Yes, audio is critical in the game. It makes sense when you look back at the inspiration. If you watch horror movies and put funny music in the back – the Looney Toons or something – it will not be as scary. So the atmosphere and the ambience that is created with the audio is critical.

I play killer a lot, and I hunt by sound. Like hearing people breathing in a corner or whimpering because they are hurt. It is super important.

I usually play more survivor, because we tend to play in a group and yeah…

… you need to hear that heartbeat!

Yes! Except when playing against Michael Meyers... he‘s kind of a meanie.**

So one last question that is a little more personal: What is your favourite horror movie?

Wow, that‘s very tough, but I think I‘ll have to go with Cabin in the Woods (2012), which is a little more borderline because it‘s a little comedy, but it‘s so good. And it‘s a beautiful loveletter to all the horror movies and I think that worked pretty well.

Thank you very much for the interview and all the best for Dead by Daylight on Nintendo Switch!


*In Dead by Daylight, the player that takes the role of the killer needs to impale survivors on hooks.
** When playing against Michael Meyers, survivors won‘t hear a heartbeat sound that tells them how far away the killer really is.


For our german version of the interview click here.